Could the upcoming revision of national accounting bring visibility to unpaid care work?

UN New York, Statistical Commission - MMM welcomes the inclusion of wellbeing and sustainability in the process of revision of the 2008 System of National Accounts. We hope it will bring about systemic change in the way unpaid family care work is considered in our economic system. 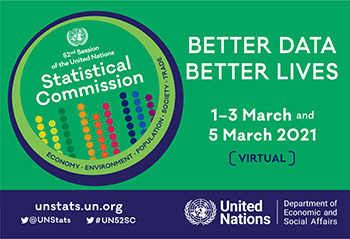 Make Mothers Matter (MMM) looks forward to the process of revision of the 2008 SNA (System of National Account) as described in the report of the Inter-secretariat Working Group on National Accounts submitted to the 52nd Session of the UN Statistical Commission.

The inclusion of ‘wellbeing and sustainability’ among the research priorities is particularly encouraging, as is the consideration of ‘unpaid household service work’ within this framework – although we prefer the term ‘unpaid care work’, which is the language of women’s rights activists and feminist economists.

The Covid-19 crisis and its cascade of consequences has shown what really matters: It has all been about care and education, and the people performing these duties, whether paid or unpaid. It has laid bare the critical role of care, not only healthcare, but also unpaid family care work, i.e. the work that is carried out on a daily basis within families to raise and educate children and take care of each other, each dependent relative. Unpaid care work is at the heart of people’s wellbeing.

This essential work, which is taken for granted, remains invisible and unaccounted for in our current economic system. In reality, it constitutes a substantial sector of the economy: depending on countries and on the valuation method, its financial value is estimated between 10 to more than 50 per cent of GDP. Although a number of countries have, following the 2008 SNA revision, compiled this invisible sector as a satellite account, we hope that with the upcoming SNA revision, unpaid care work will become part of the economic picture in its own right.

Unpaid care work is essential for the proper functioning of our economy and society, both in the short and long term. But its inequitable distribution between men and women is at the root of gender inequality: in effect, women’s unpaid care work subsidizes the economy. And in view of the population ageing, and in the context of Covid-19 and its economic devastation, we have a crisis of care, which is not about to be resolved anytime soon.

The same can be said of the environment: our economic system is blind to environmental destruction, but at the same time it completely depends on it.

We are therefore calling on Governments to use this opportunity of the revision of the SNA to also bring about systemic change and repurpose our economic system to serve the wellbeing of people and the planet.

At MMM, our main objective is to ensure that care and education, and the role of mothers and families, is at the heart a new wellbeing economy. We believe that all forms of care and education work, whether paid or unpaid, should be recognised and properly valued. They must also be seen as an investment (in human capital), not as expenses to be minimised.

It is time to build a new economic system whose primary objective is no longer profit maximisation and GDP growth, but the wellbeing of people and the planet. In other words, it is time that the economy serves people and the environment, not the other way round.