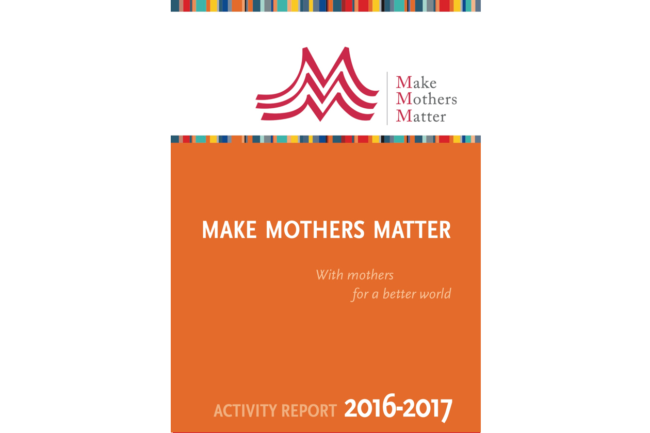 For this edition, we chose to organize the presentation of Make Mothers Matter’s Activity Report around our 3 thematic priorities: Mothers and the Economy, Mothers and Health, Mothers and Peace. The role of mothers is fundamental in almost all areas of life. If we chose to focus on these three important areas, it is because they have always been at the heart of the concerns and work of MMM. MMM never stopped researching, conducting surveys, organizing meetings, challenging political and economic decision-makers on issues related to these same thematic areas, in order to inform and work with mothers, work with them and for them.

1950 in Paris: “The economic value of mothers in their families”: about the way their activity in the family impacts on the national economy, the ignorance of the place held by mothers in laws and customs, the importance of social costs when it comes to replacing a mother, the economic difficulties that mothers face.

1954 in Bonn: About the difficulties of young mothers juggling their new family responsibilities and professional work, the Right of every child to be raised by his mother, the means of influencing national and international laws and institutions to facilitate the presence of mothers with their children.

1961 in Abidjan: “Women and mothers of Africa”: health, housing, nutrition, traditions and customs, education… the economic and social role of African women and mothers.

1972 in Strasbourg: “We all belong, through our children, to a century that we will not be able to see, and the world changes in such a way that today, nobody can stay out; all of us and each one of us are involved in the one same world, and the action of each person has an incidence on all of us… Tensions, conflicts and their tragic consequences incite us to declare forcefully that nor violence, nor oppression, nor selfishness, will ever promote a fraternal society”.

In 1974, MMM conducted a study about “Safe birth… intended to collect accurate information on the experiences of mothers before, during and after the birth of their children”.

1980 in Paris: The crucial importance of the first years of life starting from conception for a global personnel development.

1999 at UNESCO: “The Family and Social Dynamics of Mothers’ Work”: the investment of mothers in the human capital of their children is one of the most important contributions to economic and social life. It is very unfortunate that these contributions are not included in the calculation of the income and wealth of the nation1.

2003 Beirut: “The Role of Mothers in Peacebuilding”: beyond our diversities, what brings us closer together, we mothers of the world, is to ensure a world in peace for our children.

MMM’s dynamics is rooted in the long-lasting continuum of these issues; we have been addressing them for years, and they are still totally relevant today.

I wish you a good reading, hoping that you will have a thought of gratitude like me, for all those who have worked with courage and conviction for so many years and are still working at MMM, to promote the importance of the role of mothers worldwide.