UN Geneva - MMM took part in an event organized on 8 November by the International Labour Organisation (ILO) on the occasion of the 100th anniversary of Maternity Protection: "A Century of maternity protection: Transforming leave and care policies for a better future of work for all". 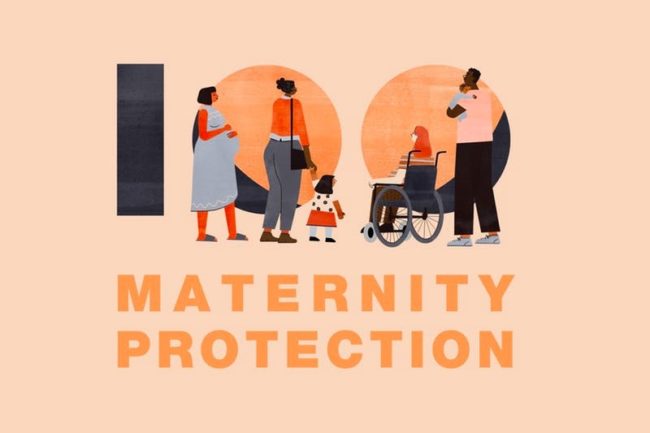 The Maternity Protection Convention (no 3) was among the first conventions that the ILO adopted at its initial International Labour Conference in 1919, recognizing the right to paid leave in relation to childbirth with employment protection. Since then,  the scope of maternity protection and benefits has expanded as reflected in a new Maternity Protection convention adopted in 2000  (No. 183).

The aim of Maternity Protection is two-fold:

Most countries have now adopted maternity protection legislation. And over the last 20 years, there have been improvements in terms of leave duration, and the introduction of funding systems of paid maternity leave based on social security instead of employer liability.

However, only 41% of women with newborns receive maternity cash benefits that provide them with income security around childbirth. In particular, for women working in the informal sector, which is the case for the majority of women in most developing countries, maternity protection remains elusive.

This is a serious gap that must be addressed: Maternity Protection is absolutely crucial for women’s economic and social rights around childbirth, as well as her future career prospects.

And as the ILO Director-General reminded in his opening speech, “It is also good for companies – by supporting maternity leave they are investing in the retention of their staff. To put it in other words, maternity protection is good for societies and it is good for economies as a whole.”

However, the return to work after maternity leave is not the end – on the contrary – it is the beginning of motherhood.

What about “Motherhood protection”? Or rather “Parenthood protection and support”, i.e. a package of measures that support women and men in their different roles, and that foster more equity in both the private and public spheres.

Paternity and parental leaves are absolutely essential and must be an integral part of such a package. But, no matter how transformative they may be labeled, they are simply not enough. They must also be part of a much broader policy/package of measures – one that encompasses multiple sectors beyond the Labour and Health Sectors.

A “Parenthood protection and support” package should, in particular, include measures to:

The European Work-Life Balance Directive, which was adopted earlier this year, and which we at MMM campaigned hard for, is a first step in this direction. It could go much further and we intend to continue our advocacy work at the EU to build on this Directive.

In fact, we need systemic transformations and a paradigm shift where

We at MMM firmly believe that it is time for the world of work to adapt to people and families and that the economy serves the wellbeing of people and the planet – not the other way around.