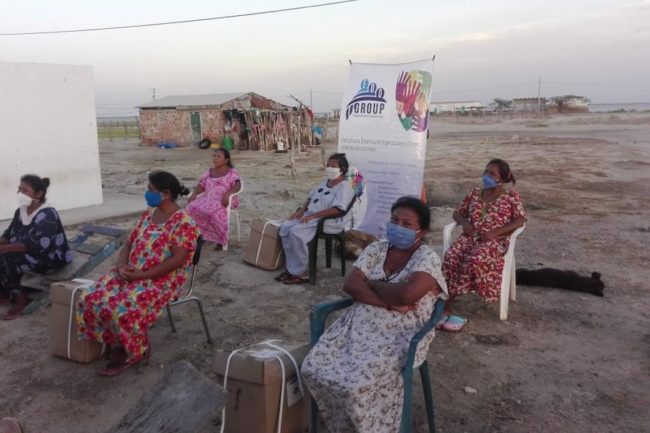 The department of La Guajira in Colombia has always suffered an acute institutional, economic and social crisis. This has resulted in deteriorating governance capacities, numerous acts of corruption, high levels of poverty and poor and inadequate health and education systems. This has also meant very limited access to drinking water and basic sanitation systems.

The Edo Group, a non-governmental organisation working in the department of La Guajira, responds to the main socio-economic needs of Afro-Colombian and Wayuu mothers and their families in vulnerable situations.

A strong presence on the ground and concrete actions

Since last August, the Group has been delivering basic necessities as well as hygiene products to mothers in the Erapu community. The NGO has also addressed the needs of children by setting up an open-air family cinema, called “Children’s Night”.

In November, the Group stood by the mothers who saw their homes threatened by flooding caused by heavy winter rains.

The aim of this institution is to collect data on the social needs of mothers in Riohacha (300,000 inhabitants), the capital of the department of La Guajira (1,100,000 inhabitants).  The project is multi-layered but mainly serves to observe and analyse:

To find out more about the Edo Group’s work with mothers and daughters please visit their website: http://edogroup.com.co/