Towards a culture of Care

Rabat, Morocco - How to involve men as equitable, non-violent fathers and caregivers for the wellbeing and health of families and gender equality? Make Mothers Matter thinks it is important to Make Fathers Matter too... and we were delighted to partner with MenCare for its 2019 Global Meeting - 3 days of a packed program of plenary presentations, workshops, networking opportunities and varied discussions. 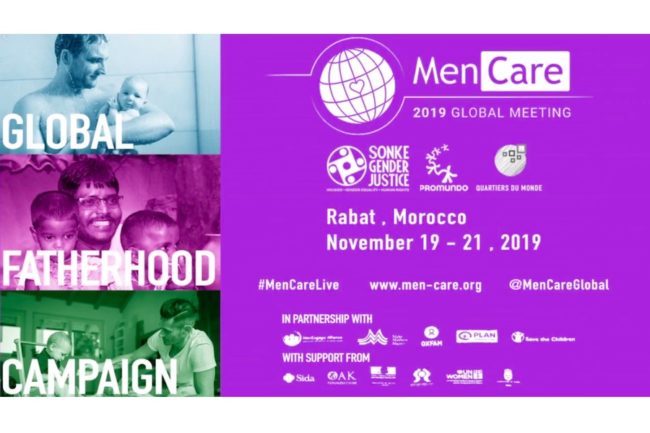 MenCare is a global fatherhood campaign coordinated by Promundo and Sonke Gender Justice. Its mission is to promote men’s involvement as equitable, nonviolent fathers and caregivers, in order to achieve family wellbeing, gender equality, and better health for mothers, fathers, and children.

The objective of the 2019 meeting was to build on the concrete recommendations highlighted in the State of the World’s Fathers 2019 report.  The report identified a shared international advocacy agenda to achieve equality in caregiving through a new ambitious MenCare effort: The MenCare Commitment – Engaging 50 countries to take action and to achieve a national goal of men doing 50 percent of the unpaid care work by 2030.

MMM and MenCare, a logical partnership 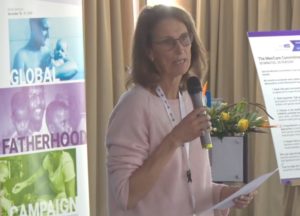 Anne-Claire de Liedekerke at the opening of the 2019 MenCare Global Meeting – watch her presentation on https://bit.ly/2OoX1jY at 36:27 min

Speaking at the opening session, MMM President Anne-Claire de Liedekerke, reminded the audience that all over the world, women – mostly mothers – are the ones doing the unpaid work of caring for others. This work is indispensable in supporting the world economy. Yet, it remains unaccounted for, invisible in national accounts, is taken for granted, and is not even regarded as “work”. Whether performed by women or men, by mothers or fathers, care work is not valued. She called for the legal recognition of unpaid family care work as a particular category of work. It should bring rights – especially access to social security, access to education & training and a voice in democratic systems.

“What MenCare is pursuing will not only have a profound personal and family impact but also a global impact, for both gender equality and peacebuilding” […]
“The truth is that in most instances, all over the world, mothers need fathers and fathers need mothers. That is why this collaboration between Make Mothers Matter and Promundo is so natural and necessary… if only to sometimes convince mothers to allow fathers to participate in the care.”

The challenges of sharing the care

No country in the world has reached gender parity in the distribution of unpaid care work. For Gary Barker, President of Promundo, there is a need to develop a “culture of care”, not only care of people but also care of the planet. Corporate Social Responsibility (CSR) should also be about supporting families, adapting to their needs, accepting flexibility and career breaks without penalising those who care.

The challenges for progressing towards a more equitable sharing of care responsibilities between men and women are many and diverse. Parental leave in itself is not enough to change mentalities.

Some figures and testimonials shared during the meeting showed the diversity of those challenges:
– In Morocco, 2/3 of men still think that a woman’s place is at home
– In the Czech Republic, men enjoy one of the most generous parental leave provisions, but women still consider that a real man’s role is to provide for his family – not to care
– In Sweden, 30% of parental leave is taken by fathers, but for many men being a stay-at-home father can be a challenge and even lead to depression
– In Lebanon, how to involve men in fatherhood responsibilities in the context of refugee camps, where families struggle and where men feel they have lost their dignity as providers

We also see a trend to externalise and professionalize Early Childhood Education and Care (ECEC), but the nurturing part cannot be externalised and remains the responsibility of parents – reminded Anne-Claire.

Care, féminism and the deconstruction of patriarchy

Valerie Bichelmeier, Head of the MMM UN Delegation, participated in the plenary panel “Deconstructing Patriarchy, Power, and Privilege: Rooting our Work in Feminist Ideals”. The following gives some takeaways from her presentation :

Valerie Bichelmeier at the plenary Panel “Deconstructing Patriarchy, Power, and Privilege: Rooting our Work in Feminist ideals” – watch her presentation on https://bit.ly/2XrGHCY at 19:25 min

MMM is resolutely feminist and convinced that:
–  Women’s rights and gender equality need the involvement of men to progress
–  Further progress in the public sphere calls for more equity in the private sphere
–  The work of Caring, “women’s work” needs to be valued and recognised for what it is: an essential work

Women have been drawn into mimicking men and gained a lot in the workplace. Now it’s time for a model where the economic world adapts to women and families, not the other way round.