A major obstacle to the emancipation of women and to equality 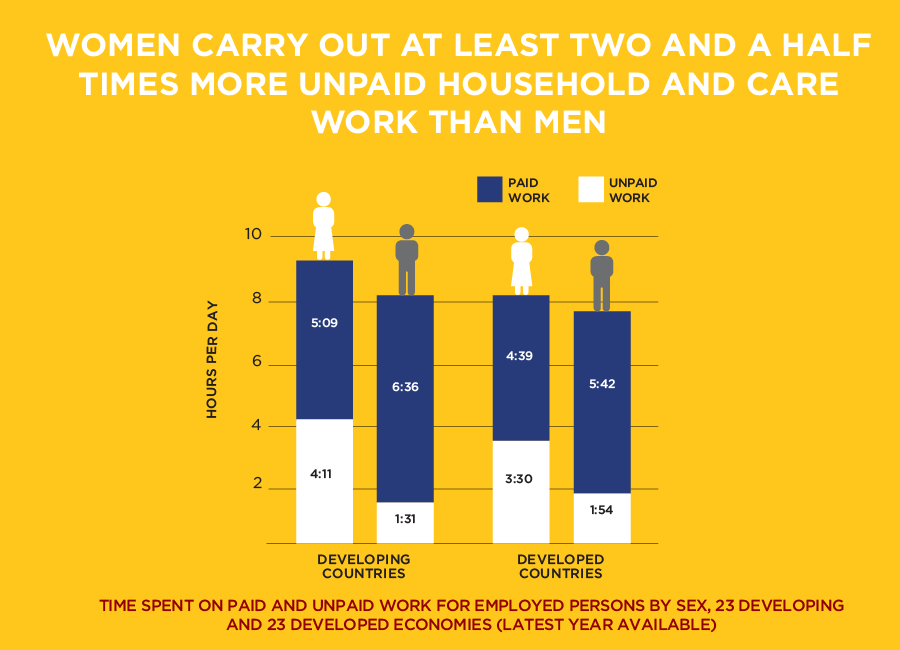 Source: UN Women 2016 – If unpaid family care work is taken into consideration and combined with remunerated work, women work more than men, in both northern and southern countries

This work, essential to the well-being of individuals, communities and of society in general, is primarily carried out by women, usually mothers. Globally, they devote on average two and a half times more time to this work than men, and up to ten times more in countries like India or Morocco.

Equally essential to the smooth running of the economy, this work is however statistically invisible. Its value, estimated at between 10% and 39% of Gross Domestic Product (GDP), depending on the country is an economic sector of its own, but not acknowledged and invisible to policymakers. 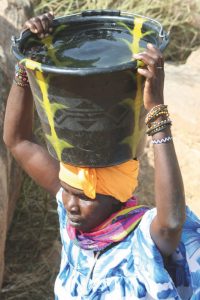 In developing countries, the issue of time spent doing unpaid domestic work is even bigger: women must cope with a lack of infrastructure and public services (particularly regarding access to energy, water and sanitation, but also health services, childcare, transport and telecommunications, etc.). In these conditions, many do not have the time to devote to money-earning activities. Mothers are thus particularly vulnerable to poverty.

Time poverty is also an important concern for mothers in developed countries. This is clearly shown in the survey “What matters to mothers in Europe conducted by MMM in 2011: mothers explained the lack of time they can devote to their family, their need for recognition, and their wish to have proper choices to reconcile their role of mother with a professional career. 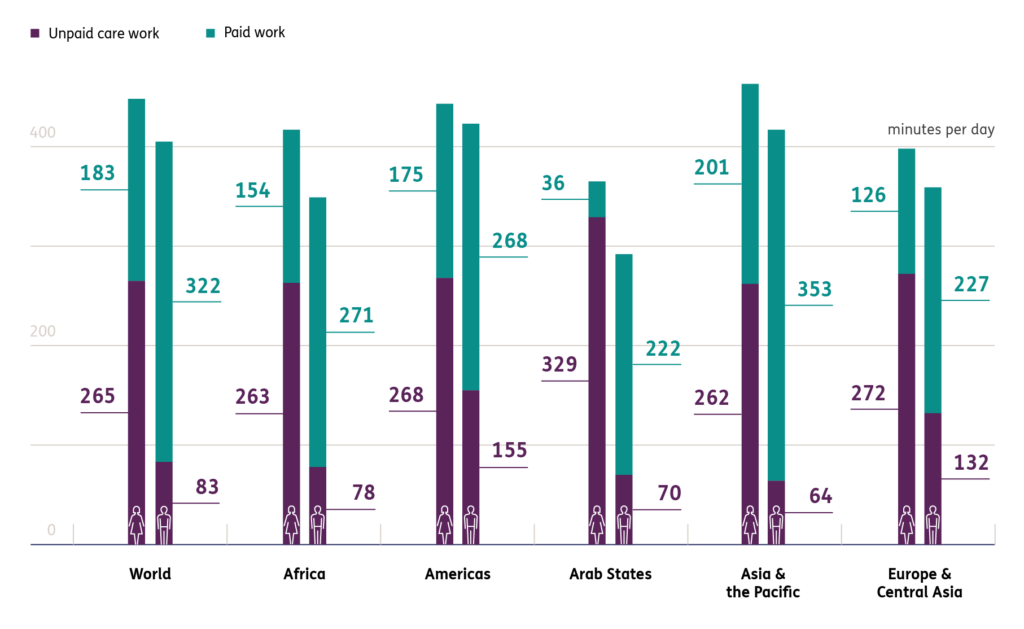 The inequitable division of unpaid family care work is a major obstacle in the effective participation of women in both economic and political life. While even more mothers have an active professional life, they are obliged to juggle their paid work with their educational and domestic responsibilities. This often to the detriment of their own leisure and rest time, and can even lead to burn-out situations. This imbalance is thus also becoming an issue of public health. Fathers must be encouraged to take their share of responsibilities.

Furthermore, because it is considered economically non-productive, unpaid family care work remains undervalued, even when it is professional: all those jobs in the fields of care and education, primarily covered by women, are badly paid.

Lacking the time to fully participate in economic life, mothers often remain blocked in inferior or dependent situations; they struggle to enjoy a minimum of financial independence, and disproportionately experience poverty – especially when they have to raise their children alone.

The unequal sharing of unpaid family care work: an issue which is gaining visibility

Although identified for some time by MMM and others associations fighting for the rights of women, this issue of unpaid care work has, until 2013, remained in the shadows. The report that Magdalena Sepulveda, then United Nations Special Rapporteur on poverty, presented in October 2013 to the UN General Assembly, finally pricked consciences. It establishes the link between the vulnerability of women to poverty and the unequal distribution of unpaid family care work – not only between men and women, but also between women of different social and economic classes. The report also clearly identifies unpaid family care work as human rights issues, and as a major obstacle to the economic empowerment of women and to gender equality.

Thanks to joint advocacy efforts of MMM and other women’s INGOs, the importance of this issue has been recognised by the UN Member States at the adoption in 2015 of the 2030 development agenda and its 17 Sustainable Development Goals (SDGs) : SDG 5, which is devoted to women’s rights and gender equality, includes a target on unpaid care work.

Target 5.4:  “Recognize and value unpaid care and domestic work through the provision of public services, infrastructure and social protection policies, and the promotion of shared responsibility within the household and the family as nationally appropriate”

→ Make unpaid family care work visible to politicians and to public opinion. Conduct regular Time Use Surveys, and include its results in labour statistics and in GDP.

→ Raise the profile of the value of this essential work in society and in the economy. It contributes to early childhood development and to education: today’s children will be the citizens and the workforce of tomorrow.

Reduce – Thanks to infrastructure and specific public services

→  Invest in infrastructure and public services which are geographically and financially accessible (water and sanitation, electricity and other types of energy, public transport, health services, information and communication technology and services, etc),

→ Prioritise more remote regions with the clear objective of reducing poverty for women and their overload of unpaid domestic work.

→ Support the involvement of fathers and promote a better sharing of domestic and parental responsibilities. Sharing the care of a child is an entry point for changing mentalities.

→  Put the care of people as the main priority. Apply coherent policies across the board involving work, education, health, social and family affairs, taxation, and the situation of women – including policies to reconcile family life and professional life, targeting men as much as women (see the work of the MMM European delegation).

These recommendations are at the heart of MMM advocacy work, which continues to collect examples of policies and good practices around the “three Rs”.