MMM fights for the pension rights of mothers in France

Are we ready to recognise and support unpaid Care work performed by parents - and mothers particularly? Broken careers because of unpaid care work explain a good deal about persistent pension gaps for women. Discussions about mothers' pensions in France epitomise a global issue pending in many other countries. The average pension of women in France is 40% lower than men's. Today, the huge majority of very small pension beneficiaries (85%) are women. Though it claims gender equality and women's challenges in the labour market as absolute priorities, the proposed reform does not hit the mark to meet what many mothers actually need and want. MMM is well aware that pension reforms are necessary but maintains that a more pragmatical view could be win win all around, for a healthier and more balanced society. 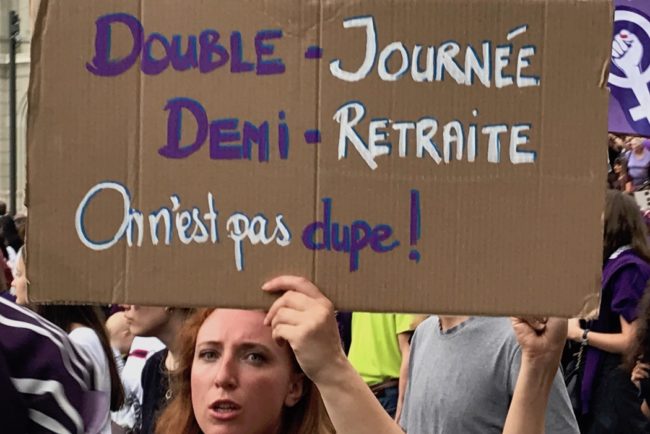 Context : France prioritises the economical challenge of maintaining a redistributive pension system despite a slow but steady demographic drop…This calls for the acrobatic challenge of presenting it as a vast improvement whilst in fact, pensions will be on the average lower for everyone.

A financial bias:  A careful analysis of the diverse measures of the reform boils down to this:  opting for a full time career is the only ‘safe’ way to get the full benefit of the reform. In France up till now, the 25 best years were taken into account for the calculating pension amounts in the private sector (the 6 best months in the public sector). Financially speaking,  taking the whole of the work career to calculate pension credits is costs saving, but the pension gap will continue to swoop on mothers  wanting to opt out of the labour market or reduce their working hours for a while, in order to spend more time with their children.

Some other measures are presented as a step forward  such as a 5% pension bonus for each reared child from the first – but only given to one of the parents … In many cases, when one parent (often father) earns a higher salary, families choose a bonus indexed to that higher salary. What happens then in the case of a divorce or an early death (in which case the remaining parent cannot benefit from any of these pension dues before being entitled to a pension at the required age)?

Maternity leaves and parental leaves would give leave to a number of pension credits but within strict limits.

What does MMM France propose?

Mothers and Family NGOs must be part of the negotiations concerning our future pensions. The redistributive pension system cannot operate without a decent birth rate.

2 – A bonus of 1000 pension credits per child thus acknowledging the time which every family dedicates to its upbringing. These credits would be shared by halves. One half to the mother bearing the child and the other according to the parents’ wishes and family organisation (mother or /and or father).

3 –  A 5% pension bonus recognising the investment of families in the future generation (of pension contributors) must be given to both parents. It takes time and money to bring up children and it often is at the expense of both parents’ saving capacities for better pensions schemes. MMM France claims that it is only fair that both parents should be granted this bonus. If  budget constraints are too high, bonus could be tied only to the period during which children are dependant of their parents.

4 –  Pension rights calculated on the prorata of the minimum wage for periods of parental leave or part-time work. The time parents dedicate to the care of their young children in place of public structures (creches and out-of-school care) must be accounted for. Parents wishing to reduce their working hours to take care of a child under 12 must be entitled to extra credits.

5 – Pension rights calculated on prorata of minimum wage for periods during which parents take care of their children with disabilities. These periods, as they are today, must be considered as  pension contributions on the basis of the minimum salary or percentage of  minium salary equal to the reduction of the parents’ working hours.

6 –  A fixed scale for the sharing of credits between spouses  in case of a divorce. Fair sharing of pension credits between ex-spouses must not depend on the good will of judges at the risk of clogging up the courts further. A standard split must be fixed. We suggest for instance that each spouse should keep 50% of the personal pension credits gained during the marriage.  The remaining credits could be shared 50/50 between them. In a case of mutual consent, ex-spouses must be allowed to agree on a different scheme of credit sharing.  Only litigious cases should be submitted to court.

7 – Supporting the renewal of generations with reasonable (costs wise) and efficient family policies. In demographic terms, it is pretty safe to say that all this leads to biting the hand which feeds the French redistributive system. France’s birth rate in the past 6 years has dropped partly due to previous measures which are less supportive to families already (minus 80 000 births per year). How will the country balance its pension system if there is a further imbalance between the pensioned population and the contributors (future generations)?

Make Mothers Matter has long highlighted the link between gender inequality, poverty and the non recognition of unpaid care work.  Governments pride themselves on investing for economical growth but usually regard investments in social structures and families as costs. This short term attitude often results in consistent expenditures further up the road to try and fix gaping social issues. It is high time to move away from a solely budgetary stand to encompass a longer term vision:  adequate pension schemes for parents and mothers especially, would go in the right direction.